We Shall Remember Them... 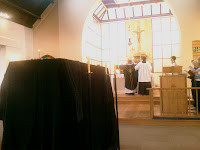 As I mentioned in my post yesterday, this morning's High Mass was a Requiem for Remembrance Sunday.  I really, really like the Requiem Mass in the Extraordinary Form... it really brings home the idea that one should pray for the souls of the deceased.  I particularly enjoyed the first reading, from the Book of Maccabees, where Judas Maccabeus makes an offering on behalf of those who have died... it's a real answer to anyone who doubts the existence of Purgatory, for if a person goes straight to heaven, they aren't in need of our prayers, and if a person goes straight to hell, our prayers will be pretty pointless, so, by praying for the dead, we indicate that there must be some place the dead go to be purified...
(And Jesus himself commends this practice of making an offering on behalf of the dead in his discourse with the Sadducees...)
There was an impressive catafalque, covered with a black pall, which apparently was the focus of much speculation by some of the younger members of the parish (and, as Leutgeb pointed out over at her blog, by some of the not-so-young parishioners also!)  Note the unbleached candles...
We had the sermon after the Mass (as is usual at a Requiem, though I am unsure why this is so) and absolutions at the catafalque at the end.
The choir have been singing the Rossini propers up until now, as the propers given in the Graduale are quite complicated, and I've been typing out the words with modern notation on Sibelius.  However, Rossini doesn't have a psalm tone for the Requiem propers, so, with a week's notice, the choir had to get to grips with the plainchant and square notes too.  They did amazingly well, and the music was so uplifting, especially the Dies irae.
Posted by Mulier Fortis on 9.11.08

I always heard that the reason for saying the sermona after Mass was so that if it at all ended up being a Eulogy of sorts, then it wouldn't actually be done inside Mass, and thus the error wasn't so bad ...or something like that! :D

Neat pics and video. Never saw a casket in church that didn't have a body in it!