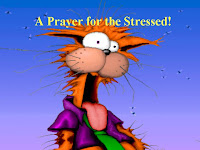 It's been a pretty hectic day.  I was running a little late this morning, so only squeeked in at 8am.  Then there was a queue for the photocopier... and, horror of horrors, I discovered that I'd left my precious photocopy card at home.  Luckily, the lady in resources took pity on me, and gave me a new card.  I did have to sign my life away in order to get it, but I'll grovel to the Head of Science later.
I taught two lessons on the trot, and then had my weekly break duty... last year I was blessed with a cushy English corridor number, this year I'm outside: but it's the small patch just outside the science classrooms and part of the staff car park, so not too problematic.  I suspect I will get very cold and wet over the next few months.
Unfortunately, break duty was followed by a cover lesson, and I was positively gasping for a coffee by the end of it.  It wasn't too bad... I found that I had taught most of the kids in that class the year before, so they didn't play up.  Fourth lesson was taken up with ordering equipment for all my lessons during the coming week (unlike many other subjects, Science lessons have to be planned well in advance, as the technicians have to check equipment availability.)
I spent lunch preparing for another lesson (the work I'd hoped to get done the previous evening) and then a bit more teaching.  Then, at 3:30pm, I was able to settle down to some marking...  unfortunately, children keep coming in to the Science Faculty office, as do other teachers, and the phone is pretty constant... and my desk is right next to the phone, so guess who's job it is to answer it and take messages...
The Head of Science came in and told us we were to expect to be visited by an Ofsted inspector on Thursday and Friday.  We're not due for an inspection, but our school is doing something or other on "creative schools" whatever they are, which means we get the joy of more people coming in to inspect us.  So, we all need to have lesson plans, "just in case"...
By 6pm when the caretaker came round to throw me out, I'd finished a pile of books and planned a few A Level lessons.  I figured that a 10-hour day was more than enough, and didn't take anything with me.
I had a few things to do on my way home, so, by the time I reached my front door, I was pretty tired.  I opened the door and suddenly realised that there was a strange beeping noise...
My first thought was that one of my alarm clocks had gotten itself stuck... and then an ear-splitting siren went off: the burglar alarm!
Now, I have never used the burglar alarm, because Sylvester walking about would set off the extremely sensitive motion sensors.  I explained this to my landlord when I moved in, and he was happy enough for me to leave the thing switched off.
The noise was getting worse, and I had no idea what the code was.  My heart was racing, and I was sure that I was about to be stormed by hoards of policemen demanding proof that this was indeed my flat!  I tried to phone my landlord on my landline, but that was dead!  Then I had a brainwave: I went outside and phoned him on my mobile. He didn't know what the code was... but, luckily, his wife did!
It seems that there had been a major power cut in our area during the day, which had tripped several alarms, including mine. I was confused, because I knew there had been a few power cuts since my arrival, and the alarm had never gone off... but my landlady said that the battery was probably low, so that it wasn't able to switch to battery backup when the electricity supply went off.  And the power cut caused the phones to go down (no idea how that works!!)
My pulse rate is now almost back to normal, the cat has calmed down (poor thing didn't come home until I went and called him, and he was extremely jumpy!) and I feel as though I've been put through a wringer.  A soothing glass of muscle relaxant might be just what the doctor ordered!
Posted by Mulier Fortis on 15.9.08

Oh my, I can't imagine how that must have felt! Still, if Monday is this bad, I guess the rest of the week just has to pick up, no?

I do so love it when people say "Oh, so you're a teacher.....short hours and long holidays". They never say it twice. I can't match your day - because I work "part-time" - but I was paid for three and a half hours today and worked 7 - mainly on UCAS references. Then home to make dinner for four and get youngest son ready for 11+ exam tomorrow. And you generously fail to mention that your "cover" lesson probably represented a quarter of your "planning and preparation" periods for the week.

Thanks, Dilly. BTW, hope your son does well in his 11+ tomorrow... will say a prayer.

oh dear! that does sound like a pretty stressful day!!

Thank-you so much. I am afraid I spent so much time arguing with my borrowed satnav on the way to Bexley that I was not really in the prayer zone.....but I'll have to make up for it now. Maths is done - and now for the horrors of verbal reasoning. BTW - middle age finally caught up with me today in my Y12 typing class. I dictated from a ten year old textbook - "The Beatles' best selling single was "Yellow Submarine"....and was asked, "What's a Beatle, Miss?"

That's the thing with teaching..you're never finished! I do sympathise & thank God everyday I got out!!

It's no conincidence, you know, that the concluding prayer of COmpline on a Monday is so very short - no-one has energy for anything longer! I don't envy you, Mac and can't imagine teaching at the moment. I just thank God that we can manage without me working too.

Back to the concluding prayer, though - it's the one about the work we have done today being sown for an eternal harvest - as a teacher, your formative influence on your pupils is so important (yadda yadda you know it as well as I do, I know, but when you're frazzled, you might forget). What I mean is, it's all worthwhile , not just in this life but for eternity. You go girl!