Unusually, I was too tired on Friday to blog about the Faith Summer Session. I like to try and get my blog posts in quickly, especially if His Hermeneuticalness or the South Ashford Priest are at the same event, because otherwise it looks as if I'm just copying them... However, I knew that Saturday was going to be a busy day, and didn't want to risk being tempted to blog past my bedtime.

Saturday was wonderful. It started with a mad dash to the dry-cleaners to get some stuff dropped in, and, after a bit of pleading, they promised to have it ready for me before midday. I then made my way to Mass at Blackfen. The Saturday morning Mass is now always in the Extraordinary Form, and I try not to miss it.

I left earlier than usual, though, so as to get back to the dry-cleaners before they closed (they finish early on Saturdays) and also to give me enough time to primp and fluff! Don't panic... no details about hair or make-up shall be forthcoming. 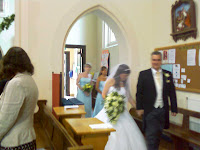 Then it was off to the Catholic church in Eltham, where the eldest daughter of friends was being married. Natalia looked stunning. Her three younger sisters were bridesmaids - and (unspecified) relatives of Phil (the groom) were also bridesmaids and page boys.

We then made our way round to Natalia's parents' house, where the reception was being held. They had a marquee in the back garden... which had a sort of "tardis" quality to it. I've seen the garden (sans marquee) and I didn't think it was that big. But the marquee seemed to go on forever. There were a couple of trees and bushes in the way, but this wasn't a problem... they were simply incorporated into the marquee, and dressed up with fairy lights. The groundsheet produced a curious illusion - you expected the floor to be flat, and then discovered that you were actually standing on a hillock... as a result, several people were staggering around while holding champagne glasses... at least, that's what they all said... 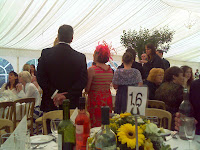 This worked in my favour: my table was the last to get given the starter - some sort of vegetable and cheese tartlet, and, by the time they reached me, a waiter had fallen foul of the flooring and dropped the last batch. I was asked if I would mind awfully having Parma ham and melon instead... as this was far more to my taste than vegetable tartlet, I was able to reassure the waiter that I didn't mind in the slightest. 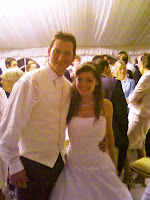 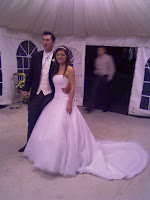 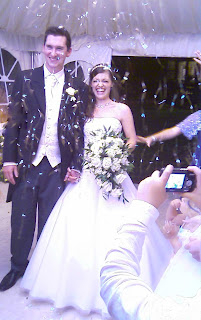 I spotted the bride standing surrounded by a bevy of friends, and jokingly accused the groom of having abandoned her already... imagine my horror when, smiling broadly, the "groom" said, "Ummm, actually, I'm Phil's identical twin..." Uh-oh. Time to beat a hasty retreat. I was consoled by the father of the bride, who told me that his brother had made the same mistake... Natalia's uncle had been driving down the road to the house when he spotted Natalia's fiancé walking down the street with his arm around a strange woman. Incensed, he'd ground to a halt and charged out of the car to remonstrate with Phil for such caddish behaviour... only to find that it wasn't Phil at all!

I have to say that portaloos will never be the same for me again. We are not talking about rickety cubicles in which there is barely room to turn around, let alone indulge in a spot of moggy-swinging. These were decidedly up-market portaloos - the ladies' consisted of two washbasins, mirrors, and two cubicles with proper toilet paper on rolls and Monet prints hanging on the walls. I found myself wondering if there was a hotel attached... 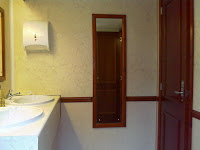 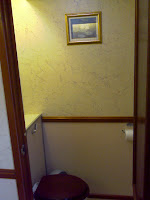 I had a wonderful time, and I wish the happy couple every blessing for their life together.
Posted by Mulier Fortis on 10.8.08

Um, "portaloo"? In the U.S. we call them "portolets" or, in the vernacular/ "portapotties"
"Portaloo"; I like it!! It sounds Australian --- rather like "kangaroo",or "didgeridoo"!
Seriously, the wedding appears to have been a lovely event. Best wishes to the happy couple.