After the highly enjoyable Faith Summer Session, I returned to Woldingham School this week for round 2: the Faith Summer Break, affectionately referred to as "Baby Faith."

Baby Faith, as its name suggests, caters for a younger clientele than the Summer Session: the children are between 11 and 15 years old. The format is pretty similar, though there are more activities planned for each day. It's a pretty gruelling experience for the helpers (it's residential... and you try persuading 43 excited youngsters that they really would rather go to sleep than run riot through the dormitories having midnight feasts and pillow fights!)

I was wary of taking photographs, because of the age of the youngsters - probably unnecessarily so, but I preferred to be cautious. However, these three reprobates insisted that I blog about them! 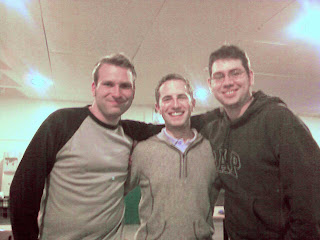 The chap on the left is Joe Kelly - an RE teacher. He managed to hold the attention of 43 youngsters before and after Mass, as he explained why the Mass was so special and such a vital part of the life of any Catholic who wished to take their faith seriously. The kids were completely captivated. He also led them in praying the Rosary during the time for Confessions - not only were the children totally engaged, but he even coped with the constant movement of helpers and children as they were being shepherded into Confession. Pretty amazing stuff... I wish I had that sort of magnetism!

Dr. Miles Leeson is the shifty looking individual on the right... not only had he given up a week to help with Baby Faith, but he had had an interview for a lectureship the previous week, and was therefore still waiting to hear from the University. He was remarkably phlegmatic - I'd have been phoning home every day to see if any post had arrived! Anyway, I keep waiting for the comments correcting my spelling, punctuation and grammar...

Finally, in the middle is Dermott O'Gorman, whose father is responsible for the Faith website (I think he still does it!) Dermott is about to go off to Valladolid for his first year of seminary. His brother Matt (to be honest, I don't know which one is the eldest) has gone out to the Venerable English College, Rome, also to start training for the priesthood. I think both brothers went to the John Fisher School, Purley, which is where the Faith Movement was started.

As an aside, the number of priestly vocations inspired by contact with the Faith Movement is amazing - have a look at the number of priests and seminarians in the photos on Fr. Tim's post. I have been privileged to become friends with very many of them: fine young men, all of them! It is very heartening to see... and it contrasts starkly with the prevailing view in Tabletista country: that we need to prepare for a Church with fewer priests. No, we don't. We need to pray for vocations and preach about vocations and encourage young men to think about vocations to the priesthood. It is noticeable that the Mass celebrated by Faith priests is always reverent and prayerful, and there's none of the mucking about with the rubrics which I decried in my last post, and no focussing on the personality of the priest, either. It's always very clear that the Mass is about Jesus Christ! 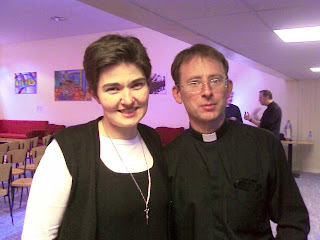 I didn't manage to get many other photos, but this one shows Sister Andrea of the Sisters of the Gospel of Life, a new religious order founded in Glasgow which gives practical and spiritual help to mothers in crisis pregnancies. Both Sister Andrea and Sister Roseann were encouraged and supported in their vocation by their contact with the Faith Movement. You can read more about the Order and their work by going to their blog... In case you're wondering, the priest is Fr. Chris Findlay-Wilson, who brought a minibus-load of children all the way from Cornwall. Hopefully they've arrived home by now!
Posted by Mulier Fortis on 14.8.08

Shifty-looking!!!! I'll have you know that the excellent Dr Miles Leeson is a splendid parishioner of the Adur Valley!! Okay, occasionally I think he could do with a haircut………
Very happy it all went so well, Mac, and thanks for the post.

We need Sr Andrea to go round our Catholic schools and give talks about her work and vocations. Our three girls loved her and listened with open and loving hearts to everything she said.