The Excitement Is Building... 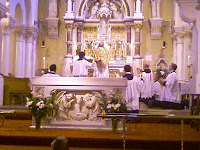 Not since the release of Summorum Pontificum has there been such a sense of anticipation and excitement among British Bloggers. In fact, since the release of the Motu Proprio, a whole new set of people have been introduced to the beauty and reverence of the traditional Latin Mass, and so the excitement caused by this imminent event is possibly even greater...

The "event" is, of course, the Pontifical High Mass at Westminster Cathedral, with Cardinal Hoyos as the celebrant. Someone said that it's the first such event since the late 1960s. I know of people who will be making the effort to get to London for the Mass from all over the country. Hopefully, a good attendance will demonstrate to the powers-that-be that devotees of the TLM are not a dying breed, desperately clinging to the past and trying to drag the Church backwards, but that there is mainstream support, especially from young people, and they just want to be allowed to worship God in the same way that Catholics have done for centuries.

I believe that Blackfen will have a respectable showing: Fr. Tim is second assistant Deacon at the throne (or some such thing), two of our senior altar servers have specific roles (one is mitre bearer) and at least two of the younger servers are also involved somehow (I think!) I shall be entrusted with Fr. Tim's big camera, and I suspect that my life will be not worth living if I don't manage to get a few good shots.

If anyone wants to meet up afterwards, quite a few of us are planning to go to the Buckingham Arms in Petty France (not too far from the Cathedral, near St. James' Park tube station) for a drink or two.

(BTW, I know that the photo is actually from Corpus Christi, Maiden Lane... I didn't have a nice photo of the TLM at Westminster Cathedral!)
Posted by Mulier Fortis on 13.6.08

I'm getting very excited about this; about to leave for the train in a few moments...

I do hope we get to meet up afterwards, just don't take any photos of me! ;-p

This Mass, and many like it to follow, will set off a wave which will slowly but surely reform the liturgy in Britain. It's alreay happening in the New York area accross the pond. . .