Just In Case You Thought They'd All Gone... 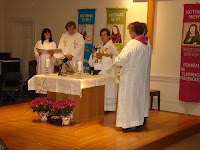 The Cannonball pointed me to the following post, which really beggars belief. I think I may have been getting complacent, as the WimminPriest crowds at both Southwark and Westminster seem to have given up... or died (well, they were getting on a bit!)

While attempting not to lose my lunch over the keyboard of my computer, I did enjoy the following little caption which accompanied another photo:

Womenpriests gather in front of mobile billboard demanding the ontologically impossible. Hilarity ensues when Rose Hudson notices someone under the age of sixty has infiltrated the photo op. 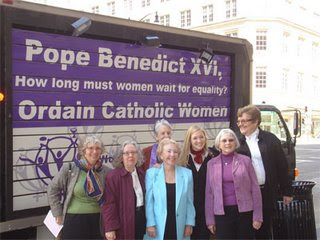 The only positive outcome of this sorry episode is that I was given the opportunity to check out the blog of the Saint Louis Catholic...
Posted by Mulier Fortis on 23.4.08

I have one thing to say to them, "go catechise yourselves properly".

The only good thing about dealing with these ladies in St. Louis is the inherent humor effect.

What a shower! Sad, poor, lonely old biddies. Oh yes, misguided and disobedient to the Magisterium too. Hopeless and hapless as well as clueless. They would do well to go on a solid Orthodox Catholic retreat and seek a good, Holy Catholic Priest - male I hasten to add, who will provide sound spiritual direction and counsel. Followed by a good and contrite confession.

Women priests - I ask you!

A mobile billboard, or could it be your shopping from tesco's?
Looks a bit like the van in your previous post.

Just remember how OLD they are. In thirty years, no more problem.
No wonder Benedict is laughing in your picture!

Weird..plain weird! Go on Mac get an i phone then you can tell me how to use it!

The best part of the Women's ordination conference website is the cartoon gallery....we may have found the least funny set of people in the world.....