Oooh, I had a real treat today! We had a Classical Rite Mass at Blackfen... not quite sure what occasioned the get-together of eight clerics, but I'm not one to look a gift horse in the mouth, so I made sure that I was able to get to it...

Fr Tim had obviously gotten ideas from the video of the altar transformation which has been doing the rounds of the blogosphere... here you can see three priests in choir just before the Mass started... 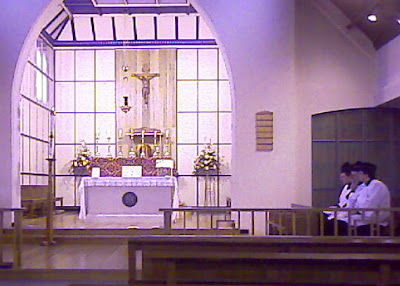 I was put in charge of Fr. Tim's snazzy camera. However, he knows me well, and so he was careful to set it up on a tripod, and tell me the key moments he wanted captured for posterity (and more importantly, for his blog!) I proved my blonde credentials by being totally unable to find the "on" switch... being unashamedly blonde, I was able to confess my ignorance in plenty of time (in front of several clerics, which took a certain amount of courage!)

The concentration required for the pressing of buttons meant that I could only take a very few on my own phone camera (Fr. Tim's camera is not user-friendly, and the "remote" release mechanism wasn't very remote... and required a fair bit of force to operate it. My thumb still feels sore!) I have photos of the First Gospel being read as the snazzy camera (being firmly fixed in position) couldn't get it... 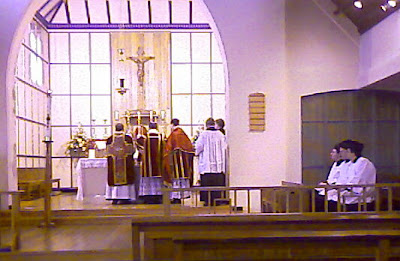 The Mass was awesome... the Mass setting was (I think) Lux et Origo and it was just chanted unaccompanied. Goosepimples-down-spine time! There were four or five adult servers (the boys Fr. Tim has been training up for the Old Mass couldn't make it, as they were back at school!) and it was beautiful. The silence during the Consecration took my breath away. And watching the carefully choreographed movements of priest, deacon, sub-deacon and servers was spell-binding (now that's what I call liturgical dance!!)

I like the Novus Ordo, it's the Mass I'm most familiar with, and when it's done well, it is beautiful too. But the Classical Rite is, I think, intrinsically more reverent, and therefore has more of the numinous about it...

Bring on the Motu Proprio, and make it pronto!
Posted by Mulier Fortis on 17.4.07

Well it does look wonderful...but where's the congregation?

Those boys should have skipped school for it..since it is part of their formation in their Catholic Faith..well in my humble opinion anyway!

Jackie, like all good Catholic events, the congregation seemed to fill up from the back... I was near the front (with the camera)

As for days off school, the schools get hammered for their authorised absence figures as well as the unauthorised ones... and now parents are likely to be challenged publicly if their child is out and about in school time... even holidays when parents are forced to take specific times due to work constraints are seriously frowned upon... and this can affect the chances of younger siblings getting into the same school... skipping school these days isn't really an option!

Well i keep mine off anyway!i put up a home-school debate on my blog, but they're likely to have to go underground too! But my eldest used to go on retreat with Miles Jesu say like the Czech Republic & it was always marked down as religious coz the Muslims can do the same(not that they've got any in their school)..

Well i sit at the front, but see what you mean..

I normally sit up-front (I prefer no distractions) but for this had to sit wherever the camera was...

As for the religion thing, it depends on the school how they react... like the school which would allow a girl to wear a crucifix round her neck if she could "prove" that it was a requirement of her faith...