The flooding is much worse than last year - and it is happening at the height of the pilgrimage season, which will affect many of the townspeople who rely on the pilgrims for their livelihoods.

The video was made early on in the flooding. Screenshots I took from the BBC News video show how much worse it has become...

The bridge over the Gave de Pau from the hospital side... (For comparison, have a look at the same bridge in a video from the floods of last year) 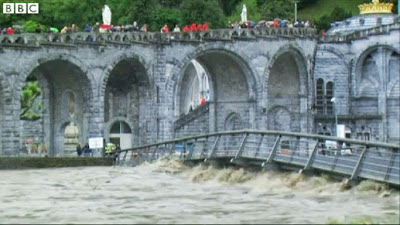 And this year the bridge itself has been partially submerged... 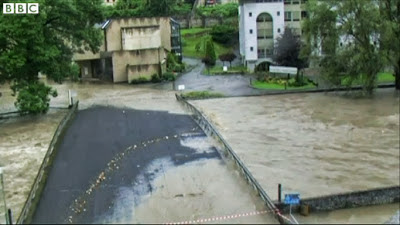 A view of the Grotto - you get a clear idea of how high the water has risen when you see where the statue of Our Lady is... 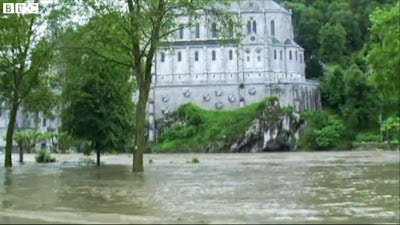 The water level of the Gave de Pau does seem to be going down, but it depends on whether or not there are further storms. Mark Lambert has a more detailed report of the damage identified so far. Please pray for everyone concerned.

UPDATE: The sight of the Domaine in front of the Rosary Basilica under water in a later video was a real shock. First, the Crowned Virgin can be seen in the top right hand corner of the photo... 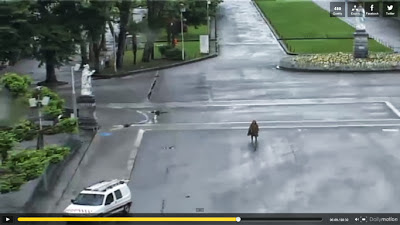 Then, as the camera moves back, you can see where the water has reached (the van hasn't moved)... 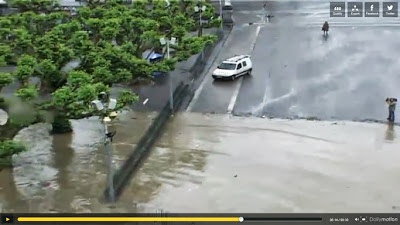 And here is the latest video (twitch of the mantilla to Fr. George Byers - he must be terribly upset, as he was a chaplain in Lourdes for many years.) Flooding in the town is also shown in the video...

I hate to be pedantic - no, actually, I love it - but "gave" is a local Pyreneen word for "river".The "River River" does not flow through Lourdes, the Gave de Pau does.

Wow, thanks, I never knew that! I've only heard (and read) it referred to as the Gave... and assumed it was the name!

I've corrected this post, but any others will just have to stay as they are...