Much to my annoyance, I have a Confirmation class tonight. This means that I couldn't just settle down for an evening's entertainment of chimney spotting. So, I've done the next best thing. I've rushed over to the church at Blackfen, opened up the church (in case of early arrivals), put on the heating (it's bitterly cold out there) and settled down in the sacristy to chimney-spot on my laptop. My data allowance on my dongle will probably disappear quite quickly, but it's worth it...

I had to settle down in the sacristy because there are hordes of children in the Small Hall - either Brownies or Rainbows or some such group. And I have got about 40 minutes before my class arrives.

I was particularly delighted to get a glimpse of the last few oaths being taken by the Cardinals, and then heard Monsignor Marini declare the "Extra Omnes!" I missed it last time.

Most of the screenshots are from the Vatican News Feed. Fantastic stuff... though it appeared to crash at one point. 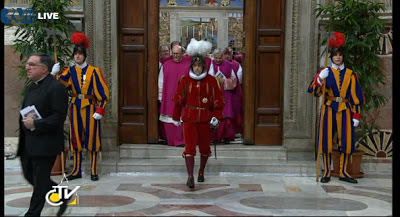 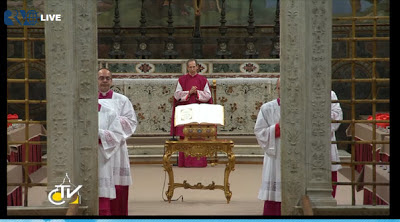 Unfortunately, my photo of the actual closing of the doors appears to have been "eaten" by the technology. Once again, I have had one of my blonde moments. I consoled myself with the thought that, if EWTN and The Catholic Herald had technology glitches, then it was hardly surprising that I experienced a few of my own... Luckily for my peace of mind, Rome Reports had a video of the precious moments... 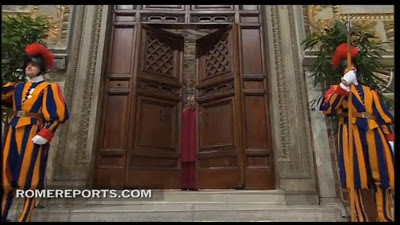 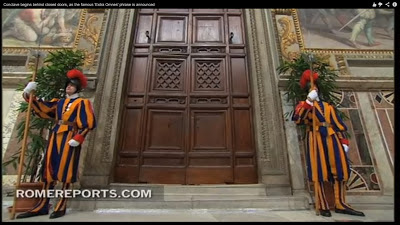 And, if you want to see the moment for yourselves...

Now all there is to do is wait for the smoke... 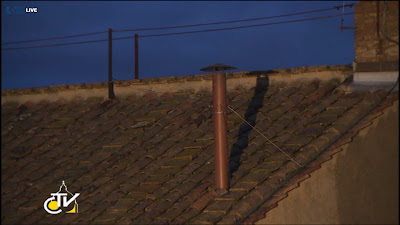 Along with the rest of the world... 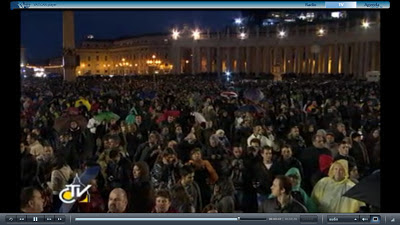