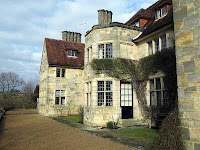 I try to go on retreat once a year as part of my rule of life, but usually it is just a private retreat at home made over the days of the Easter Triduum. This is partly because I loathe the happy-clappy, let's-all-discuss-our-feelings type of retreat that seems to be mostly on offer for women. I'm not interested in what I (or anyone else) feels about God or prayer - well, not on retreat - I want to know what the Church teaches. "Feelings" is for coffee mornings...
I'd heard that Wickenden Manor was a good retreat centre from friends of mine who had been there for days and evenings of recollection. I had a brief look at their dates last year, but nothing coincided with holidays. Then, after Christmas, a friend handed me their list of dates for 2010, and I noticed that there was a retreat for women being run at the start of Half Term. None of the other dates were convenient, and I knew that I needed a serious spiritual going-over before Lent began, so I promptly booked myself in. 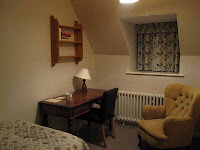 Despite having taken great care to work out my route beforehand, I succeeded in getting myself lost. I had forgotten, you see, that 7pm in February is rather dark... and, there not being any streetlights in the middle of nowhere, dark really does mean dark, so one can't read directions left on the car seat... and narrow winding lanes, going up and down hills, with ditches on one side and forests on the other, don't make for convenient places to pull over and check... add the sudden onslaught of sleet and a sudden blackout of sat-nav signal, and you have the recipe for a rather good horror movie...
Eventually, I found out where I'd gone wrong, and was able to retrace my steps. I arrived just in time to find out that the first meditation was about to begin, and with it, the silent retreat. This was a bit of a shock - I knew that there would be periods of silence (the brochure had mentioned it), but hadn't expected the retreat to be totally silent... In addition, everyone else seemed to know what they were doing...
I found it a little difficult to settle during the first meditation because I didn't know what was "coming next." However, I gathered that the meditations during the retreat would follow the Gospel of St. Luke. An entire Gospel to be covered in three days seemed rather an ambitious plan... 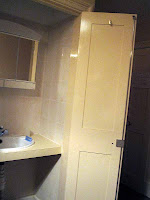 The woman in charge of the retreat then took me up to my room, showed me where we could make tea and coffee, and where the bathrooms were, and, with an encouraging smile, she left me to my own devices.
I was impressed by the bedroom, and promptly whipped out my camera. I loved the fact that the handbasin was "built in" and could therefore be hidden away. I also liked the fact that some books were already on the shelves - so I wouldn't have to go far to find some reading material. There was also a copy of the retreat timetable left on the desk... knowing that I'd never be able to remember it all, I promptly entered the information on my phone notes. I looked out of the window, and saw a glow of lights on the distant horizon, but couldn't see anything else. I unpacked, and then settled down to pray the Office before going to bed (which was very comfortable.)
Retreat Timetable 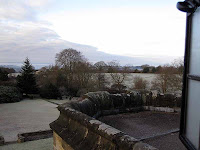 Getting up in the morning was a real effort, but I managed. Glancing out of the window, I could see that the temperature had dropped, and that it was a bit frosty out. Then it was down to the Oratory for the first meditation of the day, followed by Mass. Breakfast was weird: I'm not at my most communicative in the morning, but being in the midst of twenty women eating in complete silence was a first for me! 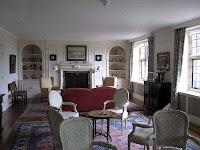 The talks before lunch each day were held in the sitting room, and each one was given by a different lay member of Opus Dei, emphasising the lay apostolate as it affected the women present on the retreat: there were, therefore, many references to husbands, children and family life and responsibilities, and it was assumed that all those present were actually involved in Opus Dei. I still found plenty of food for thought. 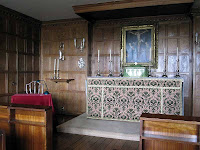 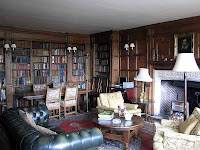 All the meditations and prayers were held in the Oratory. On one of the mornings, I went and sat in the library for a break. The amazing thing was that I hardly ever encountered any of the other retreatants... I have no idea whether people went back to their own rooms or out into the grounds... however, as you can see from the programme, there weren't many "spare" moments!
At lunch and dinner, the silence was broken by people taking it in turns to read from a book about the beginning of Opus Dei in America, Putting Down Roots. I'm sure I made a complete hash of the pronunciation of "Muzquiz" as well as some other Spanish words. I would rather have heard a bit more about St. Josémaria, but then again, I expect the women present had already heard quite a bit about him!
I came away from the retreat feeling as if I'd been clouted over the head by a very big bag of bricks: this is not a criticism, you understand! It's just that the intensity of the experience was quite a lot to take in, it was quite the most intensive retreat I have ever experienced.
I have certainly started Lent in the best way possible, and suspect that I shall be mulling over my retreat for some considerable time! If you get the chance, I would definitely recommend going on retreat with Opus Dei!
Posted by Mulier Fortis on 18.2.10

Thanks for the detailed report. Gosh, I've got so many questions! I've thought about making a retreat at Wickenden Manor myself so it's very helpful. Like you, I have no affiliation to Opus Dei but I've long been attracted to a totally 'silent' retreat. We make an annual retreat as a couple with Teams of Our Lady but I've always hankered for something a little more 'intense'.

So glad your retreat was so helpful althugh I am suspicious of Opus Dei!

I am of the generation in which all retreats were silent. I was surprised therefore to go on a retreat which wasn't silent.

I loathe the happy-clappy, let's-all-discuss-our-feelings type of retreat that seems to be mostly on offer for women.

Totally agree with you here and I also am not a great fan of those orthodox womens' groups which seem to think that women only want to hear about women saints. I like material which challenges me intellectually.

Thank you for a very helpful report. I've often wondered what the Wickenden Manor retreats were like. I must admit I do have reservations about Opus Dei, and would rather that there wasn't that focus; on the other hand, the rigour and silence sound very compelling.

There is a retreat to be held by the FSSP in England, which would perhaps would be more those devoted to the EF:

Come on you people, pleeease - start thinking for yourselves!! Nothing suspicious about Opus Dei at all. Forget all the media DVC-style hype and misinformation (sown deliberately by the devil of course). Go along to any evening of recollection - plenty around just look! You will be made very welcome and will learn a lot.

I'm not a member, but have been going to as many evenings of recollection for men on a monthly basis as I could get to over the last fifteen years.

From personal experience I can honestly say that if you are looking for solid, orthodox Catholic teaching, spiritual direction and greater encouragement in your Faith, then GO!!!! You will not regret it.

All sounds brilliant, I love Wickendon Manner and I find the talks given in Dawliffe Hall very inspiring. I always feel so spiritually lifted and determined to change my ways. There is never any pressure by the members, and they are such wonderful people. God bless Opus Dei, as He already has by allowing St Josemaria Escriva to be canonised.
Now let me ask you Mac, will you be going back for another retreat?

The answer is a resounding "yes" - but not just yet!!