Carbon Footprints And All That...

Yet another picture which made me chuckle... it isn't a picture of a cat, so I don't have to wait before posting it! 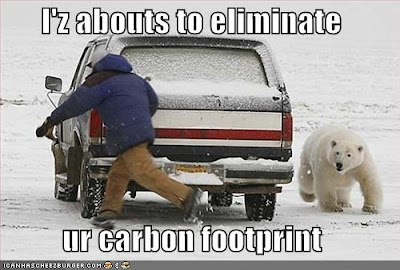 Carbon footprints - how much more of this propaganda can we endure??? This load of political agenda hokum is driven by politicians with 'squid for brains' who wouldn't know their CO2from a bull's hoof!

This is the latest REAL Science news and puts the man made CO2 global warming nonsense into perspective:

'The earth is now on the brink of entering another Ice Age, according to a large and compelling body of evidence from within the field of climate science. Many sources of data which provide our knowledge base of long-term climate change indicate that the warm, twelve thousand year-long Holocene period will rather soon be coming to an end, and then the earth will return to Ice Age conditions for the next 100,000 years.

Ice cores, ocean sediment cores, the geologic record, and studies of ancient plant and animal populations all demonstrate a regular cyclic pattern of Ice Age glacial maximums which each last about 100,000 years, separated by intervening warm interglacials, each lasting about 12,000 years.

During the 1970s the famous American astronomer Carl Sagan and other scientists began promoting the theory that ‘greenhouse gasses’ such as carbon dioxide, or CO2, produced by human industries could lead to catastrophic global warming. Since the 1970s the theory of ‘anthropogenic global warming’ (AGW) has gradually become accepted as fact by most of the academic establishment, and their acceptance of AGW has inspired a global movement to encourage governments to make pivotal changes to prevent the worsening of AGW.

The main flaw in the AGW theory is that its proponents focus on evidence from only the past one thousand years at most, while ignoring the evidence from the past million years -- evidence which is essential for a true understanding of climatology. The data from paleoclimatology provides us with an alternative and more credible explanation for the recent global temperature spike, based on the natural cycle of Ice Age maximums and interglacials.

Today we are again at the peak, and near to the end, of a warm interglacial, and the earth is now due to enter the next Ice Age. If we are lucky, we may have a few years to prepare for it. The Ice Age will return, as it always has, in its regular and natural cycle, with or without any influence from the effects of AGW.

The AGW theory is based on data that is drawn from a ridiculously narrow span of time and it demonstrates a wanton disregard for the ‘big picture’ of long-term climate change. The data from paleoclimatology, including ice cores, sea sediments, geology, paleobotany and zoology, indicate that we are on the verge of entering another Ice Age, and the data also shows that severe and lasting climate change can occur within only a few years. While concern over the dubious threat of Anthropogenic Global Warming continues to distract the attention of people throughout the world, the very real threat of the approaching and inevitable Ice Age, which will render large parts of the Northern Hemisphere uninhabitable, is being foolishly ignored.

So a message to all Polar bears 'Don't worry - be happy'!

PS - love the 4x4 truck in the picture even more than the teddy bear!

I came this (.) close to posting that today in honor of the cold weather in the North East US....did the OCD kitty instead....

We have much more to fear from Global Cooling than Global Warmng and neither have much to do with anything anthropogenic. Indeed it gives me a warm feeling in my heart putting extra carbon into the atmosphere thus ensuring the damage of any future global colling is ameliorated.

As for the cultural impact of this new religion, it is a scary, irrational, anti-human death cult second only to that other scary anti-human irrational death cult.

I look forward to the day Al Gore is stripped of his Nobel Prize and up on a charge of obtaining money by deception.

I thought the picture was hilarious.

I laugh everytime I see this picture.