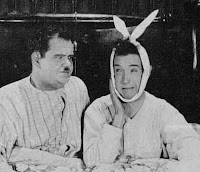 Ok. I've had toothache for a while. Thursday night, it got so bad that I went to the dentist on Friday. I was loathe to do so, because I realised that I'd probably need major root canal work done, and I wasn't sure that I could sing at the Missa Cantata for the Assumption with numb lips, tongue and gums... rather a vital consideration, as there were only three of us in the "schola" !

Anyway, it turned out that the dentist was unwilling to do anything until I'd taken some antibiotics. Then I could have the root canal work done, a crown added, and whatever else needed sorting. So I had a reprieve until Monday morning. But the pain was still bad enough to ensure that I kept the appointment...

After a bad night, this morning started off with Mass in the Extraordinary Form. I then asked if there was an Old Rite blessing available for poor suffering souls about to visit the dentist. I don't feel this was an unreasonable question to ask, because there is an Old Rite blessing of beer... and I think drinking beer is a far less risky occupation than visiting the dentist... but, apparently, there is no blessing of dental patients.

I had blogged about the appointment, and my fear, and several of you said that you'd pray for me. Thanks for that!

I went off, full of trepidation. The dentist explained what he was going to do. I've had a root canal or two done in the past, and he encouragingly told me that this was a much bigger tooth, and so it would be a much worse experience. The only reason I didn't run out of the surgery right then and there was that I was horizontal and he already had a needle in my gum...

He drilled quite a bit. Then hummed and hawed. He stopped, looking puzzled. Then he shoved more instruments in my mouth...

and finally he admitted that, surprisingly, the nerve didn't seem to be exposed. He'd cleaned out the rest of the tooth and put a temporary filling in, but that, if I survived the next two weeks without any pain, I wouldn't need a root canal filling after all!

The power of prayer, perhaps...?

Perhaps...? What's with the 'perhaps' bit Mac. No perhaps about it! It is most definitely the power of prayer! And Latin Mass this morning will have put the final seal on the niggly tooth problem.

Let's leave the 'perhaps' word with the doubting Thomases and those to whom Our Blessed Lord Called out 'Oh ye of little faith', etc.....

If you have faith the size of a mustard seed you can move mountains and even sit through some dental treatment!

Have a read about Blessed Alexandrina of Balasar see links on Fr Tim's blog:

On 8 April 1949 Our Lady had spoken to her (Alexandrina)in this way:

Let me cover you with my mantle of sorrow, with my mantle of pain, so that, with this mantle as witness, you can be invoked at all times for the alleviation of all pains of the soul and the body. From earth, they will call on you in Heaven, calling you "Martyr of Pains", to obtain comfort and ease from human suffering.

I only say "perhaps" because there is always the possibility that the dentist misdiagnosed what was wrong...
;-D

How wonderful! Praise God from Whom all blessings flow!
(I do understand your comment about the diagnosis, though.)

Congrats! Sainthood to be temporarily postponed. By the way, thanks for all the toothache posts. LOL. Now mine is starting to act up.

I'm glad the work wasn't as bad as you feared. Power of prayer indeed. I love the picture on your post, by the way. Laurel and Hardy are all time favourites of mine.

My boyfriend has just turned up with a large supply of pain killers and a do it yourself filling kit from our local chemist. Help! There is one thing worse than having toothache and that's having to endure a man with toothache

clare writes about a DIY dentistry kit???!!!!! Ye Gods!!! Does it come with the little mirrors on a stick, the sharp metal pointy things that they pick at your gums with etc.... ANd of course the BIG question does it come with a DRILLLLLLLL-bbbbbbzzzzzzzzzzzzzzz and a syringe fully charged with anaesthetic???? This sounds like fun. They were always pushing dentistry when I was at college, I just didn't fancy looking down peoples throats for the rest of my life, and anyway I don't like the sight of blood. But after six children - all that has changed!

Hey Mac,
From the States here. If you have over there "Sensodyne" toothpaste. Get yourself some + a Phillips "Sonicare" electric toothbrush. It's timed for 2 min. and it doesn't really brush (that hurts the gums and teeth) rather it jets water and paste in and around your teeth and gums. That's what I do 2x a day and I never see a dentist. I'm 60. And never have cavities.