Can You Remember Where You Were...?

...Has it really been three years already?

I remember it well. I was teaching RE in a Catholic School and had been talking about the Conclave all day. At lunchtime, Fr. James Clark (our priest chaplain) had popped into the staffroom, and we tried to see what was happening on various internet sites: there was a bit of a scare when the report of "white smoke" was mentioned, but it soon became clear that the smoke was a definite black.

After school I drove back to the parish club... I didn't have cable or satellite TV, and Fr. Tim had said that, as nothing was booked for the evening, I could go in and watch the TV there for a bit... he was at the seminary at Wonersh, I think, but the parish secretary gave me the key to the hall.

I was pretty sure nothing would happen for a while, but it was a luxury to be able to hear what the different TV stations had to say about the whole process... so I arranged my books for marking, turned on the TV and went to the kitchen to make a cup of tea. As I was fishing out the teabag, I heard the announcer state that black smoke had gone up. I was disappointed, but not terribly surprised, and I decided that I'd just drink my tea, do some marking with the news in the background and then go home. 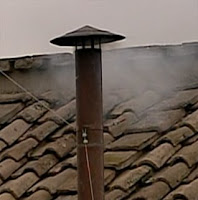 As I sat down, consternation among the announcers seemed to be breaking out. They were sure that the smoke was black... but it did look a bit grey. The crowds were cheering wildly... and the presenters were explaining that the crowds were wrong, because the smoke was black... well, grey... and anyway, to prevent any mistake they'd been told that bells would ring as well as white smoke, and there were no bells... but that smoke did look a bit pale... no, it was grey... and the cheering crowds had got it wrong because there were no bells... but... oh, it's white smoke... but we were promised bells...

...and then the bells started up!

A group of people suddenly appeared - they had assumed that the hall would be empty, and they wanted to set up the tables for refreshments after a funeral on the next day... did I mind? I explained that I was just watching the TV, so I didn't mind, as long as I wasn't in their way.

I had jokingly said that it would be great if Cardinal Ratzinger was elected, but had been told firmly that this just wasn't possible, though he might turn out to be influential as "kingmaker."


That wily old Cardinal Estevez was milking it for all it was worth... but when I heard "Josephum" I screamed and jumped up and down... I didn't know that there was another Cardinal called Joseph, but the "Ratzinger" which followed after the pause confirmed it. 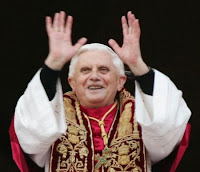 Phone calls and furious texting to friends ensued. The other people in the hall seemed a little bemused by my behaviour. "Errm... it's good news then?" "Very good indeed!" was my delighted response.

I went home happy. And, after an evening phoning friends and being phoned, I heard that Fr. Patrick was to be on Newsnight...

Oh the famous Odone argument. Silly moo she was.

I remember I was on duty in the Force Communications Centre. I had just taken a break and was watching the Conclave on the bigscreen. I was confused what the implications would be when I heard it was Cardinal Ratzinger (I was still an Anglican then), but he seemed to be someone I could warm to; indeed I had just finished his book on liturgy. Naturally, now I’m very much a fan… :D

I'd had to go to the US the weekend before so actually heard the news at a conference in a military Fort, when a US Army Major asked if anyone who was Catholic was interested in knowing who their new Pope was. As we were five hours behind, we then had to resume the Conference, and as that was the day for the social, there was no going back to the hotel after work, but we had to hang around for a couple of hours and then go to the golf course on the Fort for an all ranks social.

Luckily there was a TV in the bar; luckily I got to the bar first; luckily the barman was a Catholic and turned the TV on to an appropriate TV station; luckily, he was happy to tell those who subsequently made requests to watch anything else that "the English gentleman is watching this station".

Later on (not too much later - Americans tend to retire earlier than we do) the UK delegation went back to its hotel in Annapolis and I bought the first bottle of champagne ...

The next day was HARD.

I was just hanging out at home and was as elated as you when I heard his name.

What a divinely happy day that was!! I remember being absolutely elated and feeling like my favourite team had finally won!

When I heard: It was during lunch and a friend and I were on the phone watching it online on our computers chanting Cardinal Ratzinger's name. As soon as I heard "Iosephus" we both screamed and jumped around like little kids. We then had a celebration that evening and there were many toasts to our new Holy Father, Pope Benedict XVI, and much thanking and praising God.

Oh, I still feel the excitement when writing about it. Thanks Mac, for encouraging us to remember how blessed we felt and still are to have such a wonderful and holy Pope.:)

I had never seen this. Thank you. Good for Fr. Patrick to explain things how he did.

I had just come in from school, was in my hallway with my coat still on, had switched the radio on (it sits on the floor in my hallway so that I can hear it in every room). I was in process of taking my coat off when I realised it was live coverage from St Peter's... I had some difficulty making out the words, so went down on one knee beside the radio in order to hear better. That the conclave had come to a conclusion so quickly had already caught me a bit by surprise, and Cardinal Ratzinger as the outcome left me totally gobsmacked - it simply hadn't occurred to me as a possibility. The implications stunned me, as they gradually sank in. I couldn't really think straignt for the rest of the evening. I haven't been disappointed!

The head of Campaign Life Coalition, Jim Hughes, came into the office a couple of days later when I was there and told me that on the day, shortly after it had been announced on the radio, he saw two young feminist-looking girls, (short butch haircuts and nails through their lower lips, you know the sort of thing) crying like...

But not for joy.

Great post, Mac. I remember the comment of a friend of mine at the time, "God's usually more subtle than that".

I left colleagues at SPUC HQ watching the unfolding drama on the internet and went to 5.30 p.m. Mass at Westminster Cathedral. Bishop George Stack was celebrating the Mass. An MC-like figure glided up to the seated bishop and handed him a note which he seemed to read for a very long time. He came up to the lectern and read out the note, giving the name of the newly-elected Pope, without betraying any emotion he was experiencing. There was some applause - and then the Westminster Cathedral organ brought the proceedings to an end with the most glorious music I will ever hear this side of Paradise (or maybe my emotions heightened my musical appreciation to a level I have never previously experienced...)

Yes, I remember, I was sitting in the car, waiting for my son to emerge from a music lesson.....
So thrilled, I don't know how I got home in one piece!