After having battled with an office printer and a photocopier last week, I went out for lunch. After some considerable time had elapsed, I went to the Ladies... and caught sight of myself in the mirror. I had large black toner thumbprints on my nose, cheek and chin.

Horrified, I challenged my lunch companion: "Why didn't you tell me? Don't try to tell me you didn't notice... We've been sitting here for ages..."

Apparently, he didn't want to offend me.

The implication was that, for men, commenting on a woman's appearance is a bit of a minefield.

So I thought the occasional bit of advice might be in order.

First of all, gentlemen, please note that responses are often context-dependant. Take the simple question, "Does this look ok?" occasionally phrased, "How do I look?"

It usually means something along the lines of "Does my bum look big in this?" or "Do I look like mutton dressed as lamb?"

The reply given depends on the context... if the question is being asked at home (before going out), or in a shop's changing room (before purchasing the item concerned) then an honest answer is called for. If, on the other hand, the question is asked while "out" (at a party or other public situation) then the answer should always indicate that the item looks very nice indeed. If there are concerns that female friends might indicate a contrary view, it is advisable to preface the comment with "I think" or "In my opinion," which suggests that any contrary opinion is purely a subjective one... and you won't be accused of lying, but merely considered to have very poor taste.

Ok, that's a start. I think there's a book just waiting to be written... so, all you chaps, this is your chance to get the questions which have you flummoxed into the com-box, and girls, here's your opportunity to air the most glaring misunderstandings you've encountered... 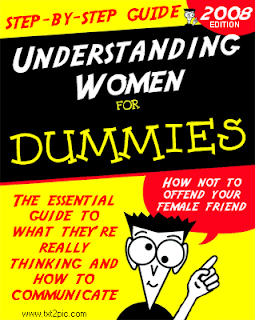 LOL. I am in a minority where I would tell a woman if she had ink all over her face.

Mind you I still feel guilty after it. You guys are like another species! ;-p

This book has been written.


In englisch it would read:

Oh brother! This is a very dangerous topic, because not only do we guys have to deal with these silly questions, there is never a right answer because of the hormonal state of the woman! Hence, what is a perfectly acceptable answer one day is not the next!

I learnt to negotiate these questions with the simple line "Do not ask if you don't want to hear the truth" Because you (ladies, plural) don't always want the truth, sometimes you want to hear you look good, even if the outfit is awful. Why can't you all just wear jeans and t-shirt and get it over with?!

Rule of thumb should be: "If it's something that can be corrected, like a piece of broccoli hanging from my tooth I want to know."

If a woman really wants to know what a guy thinks about what she is wearing - it is key to ask a GAY male friend. So if you're a straight male if when "out" as Mac says, there IS only one answer: "You always look wonderful to me."

"Does my bum look big in this?" has two answers:

compassionate "who ever said you have a big bum!"

I'd sooner take my chances with the Taliban than answer a question about a womans appearance. Years of experience has taught me to feign deafness when these questions are asked. ;-}

P.S
For my own safety I cannot leave my name.''Her indoors'' reads your blog as well.

Here's a quick guide I helped edit for some of the junior engineers at work:

She says - What she means (ALWAYS dependent on context or lunar position)
You want - I want you to do this...
We need - I want
It's your decision - The correct decision should be obvious by now
Do what you want - You'll pay for this later
We need to talk - I need to complain
Sure...go ahead - I don't want you to... I dare you
I'm not upset - Of course I'm upset, you moron -
You're...so manly - You need a shave and you sweat a lot
You're certainly attentive tonight - Is sex all you ever think about?
I'm not emotional! - I'm on my period
Light! - You left a light on somewhere in the house, turn it off
I’m cold - Get out of the warm bed and turn on the heater
I’ll wait for you in the car - Hurry up
Be romantic - Turn out the lights, I feel fat
I heard a noise - I noticed you were almost asleep...
Is my bum big? - Tell me I'm beautiful
You have to learn to communicate - Just agree with me and learn to read my thoughts
Are you listening to me!? - [Too late, you’re dead]
This kitchen is so inconvenient - I want a new house/apartment/curtains/carpeting, furniture, wallpaper...
Hang the picture there - No, I mean hang it there!
Do you love me? - I'm going to ask for something expensive
How much do you love me? - I did something today you're really not going to like
I'll be ready in a minute - Kick off your shoes and find a good game on TV

In answer to the question "What's wrong?"
The same old thing - Nothing
Nothing - Everything
Everything - My PMS is acting up
Nothing, really - It's just that you're such an _
I don't want to talk about it - Go away, I'm still building up evidence against you

Do not consider yourself trained or domesticated until surviving other improvised twists of logic:

Also, never ride in the car with an angry woman. Bill Cosby pegged this correctly: "you could be glancing down to light a cigarette and a truck could be coming 90 miles an hour head on to hit you and she wouldn't say anything. You look up just in time to swerve and say 'WHY DIDN'T YOU SAY SOMETHING' and she'll say: 'you're so damned smart you know everything!!!" It's true.

Where would you like to eat?
I don't care, you decide. (But it better be someplace I like!)

A tender gentleman would lean over and gently touch your nose/cheek/chin with an amused smile, tactfully not mentioning the offending stains as he carefully cremoved them, leaving you to swoon over his romanticism while none the wiser to his practical administrations saving his own public embarrassment, and yours.