In Search of St. Anne Line

St. Anne Line is the particular patron saint I chose when I first took my vows. I thought that, in the run-up to my Renewal of Vows, it might be an idea to put up a description of a pilgrimage I made a few years ago, in her honour... I wrote it up, and Joanna (of Auntie Joanna Writes fame) persuaded me to submit it for the ACW Review. It was published in June 2004...

...unfortunately I don't know how to put up a longer version of a post somewhere else, so the whole thing will be posted here. 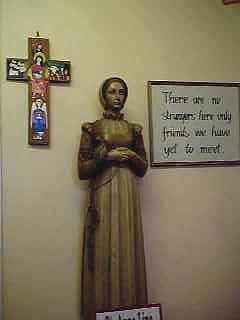 I was attracted to St. Anne Line as a patron because of her feisty retort at her trial when charged with harbouring a priest, where, totally unrepentant, she declared that her only regret was not harbouring a thousand of them. However, I had been unable to find out very much else about St Anne, and even hours of surfing the web had only resulted in three very sketchy accounts.

I was talking to Joanna, about the lack of information available, and it was then that one of those spooky coincidences occurred. She told me that she had recently met a priest at Tyburn Convent, and he was the Parish Priest of a church dedicated to Saint Anne Line. We both agreed that this was amazing, and agreed to make a pilgrimage to the church to see if we could find out more.

The day we picked for the pilgrimage was a Saturday. We both wanted to get to Mass, but although the idea of attending Mass at the church dedicated to St Anne was an attractive one, the idea of getting up early enough to find it was somewhat less so. Instead, I drove over to Joanna’s parish to meet her, and we attended Mass there. Then, very excited, we jumped into the car, and tried to work out the best route. This was when we hit our first snag. Neither of us knew the address of the church. We decided that we might try to locate it by looking through the Catholic Directory.

The first one we came across was in Dunmow, which made sense because this was where St Anne was born. We looked at the name of the parish priest, and this wasn’t the priest Joanna had met at Tyburn. Eventually we found the one she was looking for, in South Woodford. This lead to the second snag: which one should we visit? We decided to look at distances, and consulted our map. Third snag: Dunmow wasn’t listed in the map index. We then rang the number listed in the directory, and I spoke to an elderly man (presumably the Parish Priest) to ask for directions. After a few acidic comments about the poor quality of our map, he told us the name of a nearby town. Then I realised that Dunmow was on the map…. but it was listed as Great Dunmow in the index. Silly me!

We still were torn between the two places: the church in Dunmow was named for Our Lady and St. Anne Line, and was the older of the two churches, as well as being in the town where she was born; the church in South Woodford was dedicated to St. Anne Line alone, and was the parish of the priest Joanna had met at Tyburn. Intrepid explorers that we were, we hit on a compromise... and decided to visit both.

The journey itself was very enjoyable, with both of us chatting merrily away. In fact, we were chatting so much that we missed the turn-off for the M25 (only coming to our senses when we passed Guildford) and later took a wrong-turning onto the M11 (we suspected that we were going the wrong way when Joanna spotted Canary Wharf dead ahead!) But the weather was gorgeous, traffic, for once, was minimal, and we hardly noticed the time. Before long, we had arrived in Dunmow.

We found a car park in the centre of the town, and checked out the map for the location of the Catholic Church. It was only a few streets away, and so we strolled off to find it. It didn’t take us long, but it didn’t look much like a church from the outside. Both of us gazed at it in horror, but we decided to go and have a look inside.

The church itself was locked, but as we stood there considering our next move, a woman appeared at a side door. She explained that the church was normally locked during the day, but that she was cleaning in preparation for the Sunday services, and we were welcome to have a look inside. We followed her through a community hall and stepped into the church.

The contrast with the dismal exterior was so great we were almost speechless. The walls were faced with beautiful wood panelling and there were some really lovely paintings on the walls, including a huge one of St Anne Line, probably painted around the time of her beatification. We started to chat to the lady who had let us in, and she told us a bit about the parish and how it had developed over the years. She also brought us several large pieces of card which had information about St. Anne pasted to them. I asked if she had access to a photocopier, and she explained that there were several places in the High Street that did photocopies, and we were welcome to borrow the information until we could get it copied.

Having looked around for a bit longer, we lit a couple of candles and said a prayer or two. We then went in search of a photocopier and lunch, in that order. We found a bar with a garden, and sat outside enjoying good food and good conversation. We were tempted to linger over coffees, but it was getting late, and we still had another church to find. Reluctantly, we bade farewell to Dunmow, amazed at the contrast between the outside and the inside of the church, delighted with the information gleaned about St. Anne and marvelling at our luck at finding the lady in the church.

The journey to South Woodford was even easier than the one to Dunmow, and with fewer unintentional detours. We located the church easily, but again were appalled at its appearance: it looked like some sort of concrete bunker. The church was closed, and we wandered across to the presbytery which was nearby. The parish priest welcomed us, and invited us in for a cup of tea. He was just back from an Ordination, and would shortly have to go in to hear Confessions, but he said he would be delighted to show us the statue of St. Anne. This, he explained apologetically, was actually being stored in his garage, because it had been vandalised. He was hoping to set it up inside the church, but hadn’t yet prepared a suitable spot.

The inside of the church was again in complete contrast to the exterior. A passage about St Anne from the Martyrology was framed on the wall, but it was in Latin. I copied down a Latin inscription from a stone in the wall, hoping to get my own Parish Priest to translate it for me later. We stayed for a while to say another prayer, and then started off for home, praying the Rosary together in the car.

I felt sure that St. Anne was watching over our little pilgrimage, and was helping us along. I felt it very strongly when we met the lady cleaning the church in Dunmow, quietly preparing everything for the celebration of Mass, much as St. Anne herself must have done. And I felt it again when we turned up at just the right time to meet the Parish Priest in South Woodford. I used to think of pilgrimages as long journeys to big shrines in foreign countries, but every time we make a special journey to a church or other place associated with a saint it is a pilgrimage of faith. I hope and pray that I will be able to make many more.

I have just moved to Dunmow and was equally horrified by the exterior of the church when I first saw it. You are right it is a surprise inside. I'm quite fond of it now. I was reading a book about the Jesuit martyrs when I first came and was excited to find St Anne in it. She sounds like she was quite a woman!